Afro-beat. What Next? Part 2

The world is watching and waiting for hits that will enhance and give the afro-beat genre a stronger foothold, keep it interesting until it gets passed on to the next generation. It's what Fela Kuti would have wanted.

I mentioned JK Brimah because Fela Kuti's personal and musical development wouldn't have been complete without the influence of JK. (A chapter is dedicated to JK in Fela's autobiography "This Bitch of A Life" written by Carlos Moore), the story is even more interesting when JK tells it. It annoys me that today's practitioners see JK (who is still alive and well) as an irrelevance, only good in their eyes when they want their undeserved validation. 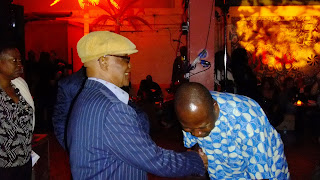 JK at a Party

Other individuals who supported and encouraged Fela's musicality but today are given no credit, (especially during the years of strife and turmoil), were individuals like Tunde Kuboye, who ran The Jazz Club of Nigeria, promoted African and Jazz music at the Museum Kitchen every Friday evening, and organised an African Music Festival once a year. His late wife Frances, Fela's cousin, a dentist by profession. A lady who could easily have made it as a professional singer, if she'd decided to leave Nigeria and settle anywhere in the western world. Some others were Fela's contemporaries who played Jazz at the floating Buka on the Marina in Lagos, guys like my ex-boss at Japan Petroleum, Femi Asekun (Skipper), his friend Femi Adeniyi-Williams and uncle Art Alade. These were the people Fela would rush to jam with, whenever he could break away from the madness at Kalakuta.

Fela developed Afro-beat because he wouldn't have been able to make a living playing jazz. Not in Nigeria anyway. So he developed his genre, using a core of local musicians like Tony Allen, the amazing drummer, Henry Kofi (Pedido), Igo Chiko and a couple more talented instrumentalist, who remained a constant part of the Nigeria 70 band, later to become the Africa 70. The commercial music played by the band during those heady days, has stood the test of time. The compositions were unsurprisingly popular and accepted by everyone because of the satire and social commentary in those compositions. Songs like "Na Fight", "No Bread", "JJD", "Buy Africa", "Don't Gag Me", "Lady", "Shakara", "Yellow Fever" etc., amused and entertained, but didn't stray into the political minefield that would bring the wrath of military governments down on Fela's head in the later years. 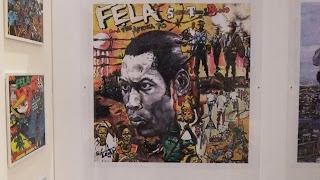 What I'm trying to say here is, even when Afro-beat went political, there was always a theme to the compositions. A message that made every song unique and identifiable to the listener. That element is missing within the genre today. The message and point to Afro-beat as a sound, is in danger of being swallowed up and lost forever, if the diluted and watered down modern compositions continue. After all is said and done, what would be the point of it all? 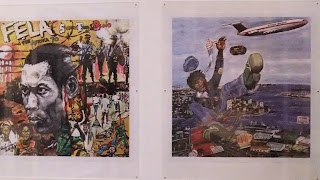 I think Fela would have wanted Afro-beat to grow as a satirical vehicle for social commentary, more than he would have wanted to be regarded as an icon. He was after all a man like anyone else and not the caricature two dimensional image that is being planted unto the public consciousness today. It would be better if practitioners of Afro-beat drop the hype and get back to basics, there is plenty more work to do because that man, Fela was a tough act to follow when he was alive. It makes it even tougher, that he is now regarded a legend and an icon. 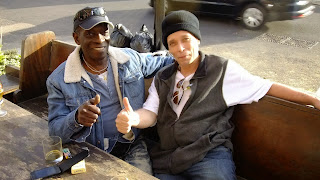 Tony Allen and I

I would urge any artist interested in venturing into afro-beat, to disregard what is presented at the moment. Ignore the half baked presentation of cover songs that could never compare to the original songs. Study the philosophy behind Fela's tunes and if possible, imprint their own personality into their compositions. This would be the ideal way to excel at making a great and unique afro-beat standard. In short, being original is the most important thing, and believe me, the genre needs this, more than anything else.