Death of a Civil Servant

A. P. Chekhov was born in 1860.
In 1879 he enrolled in the Medical Faculty of Moscow University to study medicine. By 1888 at the age of twenty eight, he had published over five hundred short fiction stories. Most of them comic stories and farce.. His stories were published in weekly magazines and newspapers to help pay his bills while he studied.

Ivan Dmitrich Kreepikov was sitting in the second row and watching The Chimes of Normandy through opera glasses one fine evening. As he watched, he felt on top of the world. Suddenly, his face puckered, his eyes rolled upwards, his breathing ceased..lowering his opera glasses, he bent forward, and…atchoo!!! He sneezed.

Now, sneezing isn't prohibited to anyone or in any place. Peasants sneeze, Police Chiefs sneeze. Everyone sneezes. Kreepikov didn't feel embarrassed at all, he simply wiped his nose with his handkerchief and, being a polite sort of fellow, looked around him to see if he had disturbed anyone by sneezing.

But then, he did have cause for embarrassment. He saw that the little old gentleman siting in front of him, in the first row, was carefully wiping the top of his bald head and the back of his neck with his glove and muttering something. The elderly gentleman Kreepikov suddenly recognised, was General Shpritsalov, Number two head in the Ministry of Communications.

"I splattered him!" thought Kreepikov. "He's not my chief, it's true, but even so, it's awkward. I'll have to apologise." So, he gave a cough, bent respectfully forward, and whispered in the General's ear: "Please excuse me, Your Excellency, for spattering you…it was quite unintentional…"
"That's all right, that's all right…"
"Please, please forgive me. I - I didn't mean to!"
"Oh do sit down, please, I can't hear the opera!"

Disconcerted by this, Kreepikov gave a stupid grin, sat down, and began to watch the stage again. He watched, but no longer did he feel on top of the world. He began to feel pangs of worry.

In the interval he went over to Shpritsalov, sidled up to him, and conquering his timidity, stammered:
"I spattered you. Your Excellency…Please forgive me…I..it wasn't that - em "
"Oh for goodness' sake…I'd already forgotten, so why keep on about it?" said the General as his lower lip twitched impatiently.

"Hm, he says he's forgotten," thought Kreepikov, eyeing the general suspiciously, "but he looks as nasty as you make 'em. He won't even talk about it. I've got to explain - anyway sneezing's a law of nature…Otherwise he may think I mean't to spit on him. And, if he doesn't now, he may later!"

Kreepikov told his wife about it when he got home. His wife treated the incident too lightly, he felt. At first she had quite a fright, but as soon as she learned Shpritsalov was 'someone else's' chief, she calmed down.

"Even so, go along and apologise," she said. "Otherwise he'll think you don't know how to behave in public!"
"That's right! I did apologise but he acted sort of strangely..I couldn't get any sense out of him. There wasn't time to discuss it either."

Next day, Kreepikov put on new uniform, had his hair trimmed, and went to Shpiritsalov. As he entered the General's audience room, he saw quite a few people there, in their midst was the General himself. He'd begun to hear petitions. After dealing with some petitioners, the General looked up in Kreepikov's direction.

"Yesterday at the Theatre, Your Excellency, if you recall," the little clerk began his speech, "I sneezed, sir, and I inadvertently spattered, please forg .."

"Drivel! You're wasting my time. Next!"said the General, turning to another petitioner.

"he won't even talk about it!" thought Kreepikov, going pale. "He must be angry, I can't leave it  like that…I must explain…"

When the General finished interviewing the last petitioner and was headed back to the inner recesses of his department, Kreepikov followed him and mumbled:

"Your Excellency!  If I make so bold as to bother Your Excellency, it is only from a sense of deep repentance, I'm not doing it on purpose, sir, you must believe me!"

The General pulled an agonised face and brushed him aside.
"Are you trying to be funny, sir?" he said, and vanished behind a door. 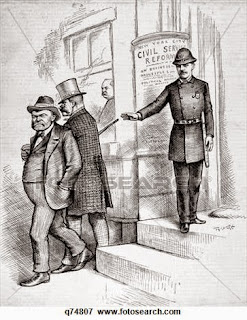 "Funny?" thought Kreepikov. "Of course I'm not trying to be funny! Calls himself a general and can't understand! Well, if he's going to be snobbish about it, I'm not going to apologise anymore!  To hell with him!  I'm going to write him a letter, but I'm not coming all the way over here again. Oh no!"

Such was Kreepikov's thoughts as he made his way home. He did not write to the General, though. He thought and thought, but just  couldn't think what to say. So the next morning, he had to go and explain in person.

"Yesterday I came and disturbed Your Excellency," he stammered.The General raised his eyes questioningly him, "not to try and be funny, as you kindly put it. I came to apologise for sneezing and spattering you, sir - it never occurred to me to try and be funny. How  could I dare to laugh?! If we all went about laughing at people, there'd be no respect for persons, erm, left in the world - "

"Clear out!!! bellowed the General suddenly, turning red and trembling with rage.

"Clear out!!! the General repeated, stamping his feet.

Something snapped in Kreepikov's stomach. Without seeing anything, without hearing anything, he staggered backwards to the door, reached the street, and wandered off…He entered his home mechanically, without taking off his uniform lay down on the sofa, and….died.