If you're of a queasy disposition...Weak stomach or similar ~ Please do not read.


A judicial executioner is a person who carries out a death sentence ordered by the state or other legal authority, which was known in feudal terminology as high justice.

Mr Bello bellowed when he caught sight of the gallows twenty yards away. The hangman waited patiently, a casual look on his face high up on the raised platform.

Bowels already loose, he defecated when he looked up and saw the rope that's going to be placed around his scrawny neck.

The faeces trickled down his trouser leg as if he had diarrhoea. An officer to his right gagged. His jowly face looked like it would retch any moment.

The prison governor and chief warden were standing next to the steps that led up the wooden platform waiting for the prisoner and his escorts.

The warden suddenly looked confused, then recovered his composure. He'd sussed the situation: Because his governor was nearby, it took him longer than it normally would to realise that the prisoner had had an accident and emptied the content of his bowels. All of this, he figured out a couple of seconds before the smell hit. One whiff of the odour made his mind up for him.

"Take the prisoner back, and clean him up!" he barked..Now, that should give everyone involved breathing space, he thought. They all seemed happy with the brief postponement, except maybe the hangman who obviously wasn't paid by the hour. This executioner looked like he'd rather get it done and over as quick as possible so he can get home in time to watch his favourite show on the television.

Nobody needed this respite more than Bello. By the time they'd got him inside, he was sweating profusely. The brand new clothes a family member had purchased was soaking wet, the top was drenched in his sweat, the bottom in shit.

Surprisingly, he was still professing his innocence to anyone within earshot who would and could listen. He continued to protest the mistake as they shoved him roughly into the concrete shower cubicle by the death cells.

The cold water hit and suddenly brought him back some calm and abated his terror. It put his mind sharply in focus. The memory of the myriad of events that brought him to this very moment flashed before his eyes..... 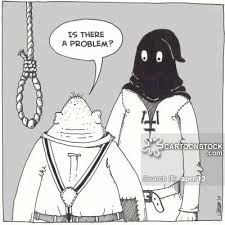