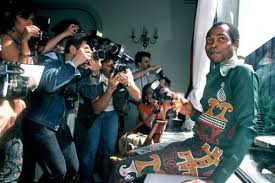 "What is Afrobeat?" He looked me in the eye. I looked away for a few seconds to ponder the question. And then I said, " a successful blending of a tight African rhythm, a soul feel, add some poppy influences here and there. Put in heavy jazz inflections on the horns, that should do the trick."

Trying to explain this music genre in a nutshell to a seasoned session musician, a person I knew had worked many years with top bands and performers, can be unnerving. This guy had toured with some of the biggest names in music. I had the feeling he was trying to catch me out. Why else would he be asking for a definition?

He looked me out the corner of his eye, a few minutes after we discovered the spot we believed to be the most acoustic friendly in the club. The band on the stage played on. The publicity for the event specifically advertised the music as Afrobeat. What we were actually hearing being played was Fuji and not Afrobeat.

"I wish they wouldn't call this Afrobeat." I looked at him as I said this, he nodded. It could have been the lighting in the club, but he looked like he had a smirk on his smug little face. I moved away from him, better to put some distance between him and I, before I put my fist through that face.


Twenty minutes later, I was out of there. I can only take the Fuji sound in small doses anyway. I was irritated because someone had goofed. I felt deceived that either the promoter or the artist had described the music on offer as Afrobeat when it wasn't. It was a fraud, a deception. This kind of thing will water down a genre that happened to be on the up and up.

"Hey, wait up!" I looked back, it was him again. Lucky for him, I was a bit calmer now. "Are you going already?" he asked me. "Yeah," I replied, "that isn't the music I came to hear that's being played in there!" He beamed at me, "thanks for confirming that, I was wondering too. It's why I asked you in the first place what Afrobeat was. You're one person that should know, you were there from it's birth or so I'm told."

He was wrong though, Afrobeat was being played long before I was born. It just wasn't called that then. The truth is, Fela Kuti made it popular and guided it to ascendancy. His thinking that I should know was flawed, I really didn't know. The only thing I was sure about was, if this genre gets further diluted, it'll either be appropriated by other cultures or it'll disappear altogether.

"By the way," I said, "that definition I gave about Afrobeat in there?" I looked him in the eye, "well, it was incomplete, Afrobeat is also a way of life." I gave him a wave of my hand as I turned around and walked away.