She is the first non human that's now classified as an earthling.

Sofia is an artificial intelligence robot and the first robot "citizen" on our planet.

I don't think anyone could have imagined that progress in Artificial Intelligence technology would develop as quickly as it has.

It's here, and it has come with many human characteristics. 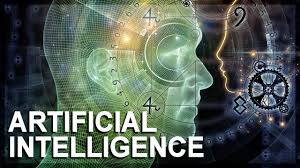 The programming of artificial, self learning robots while we still have deadly conflict though,  is a worry...

We know about the killer drones that are already in use over battlefields all over the planet.

Many more have been developed or are in different stages of development that we know nothing about. What I would like to know about are the safeguards that are in place that these intelligent machines wouldn't turn on us human beings.

Russian President Vladimir Putin, speaking to a group of Russian students, called artificial intelligence "not only Russia's future, but the future of the whole of mankind... The one who becomes leader in this sphere will be ruler of the world. There are colossal opportunities and threats that are difficult to predict now."

The technology that the science fiction writer Isaac Asimov predicted 75 years ago, has arrived. Much more sophisticated and smarter than he imagined, and it's come 40 years early.


In Asimov's fiction novel "Runaround" there was a government Handbook of Robotics that included the following three rules:

2. A robot must obey orders given it by human beings except where such orders would conflict with the First Law.

3. A robot can protect its own existence as long as such protection does not conflict with the First or Second Law.

Etzioni has suggested an update to Asimov's rules as follows:

1. An A.I. system must be subject to the full gamut of laws that also applies to it's human operator.

2. An A.I. system must clearly disclose that it's not human.

3. An A.I. system cannot retain or disclose confidential information without explicit approval from the source of that information.
.
Etzioni offered these updates and suggested to begin a discussion that would lead to a non-fictional Handbook of Robotics by the United Nations.

Elon Musk, together with deep mind co-founder Mustafa Suleyman and top specialists have called on the United Nations to ban the development, deployment and use of autonomous weapons within A.I. (Posted to the Robot Report and other sources.)

These warnings should be heeded.